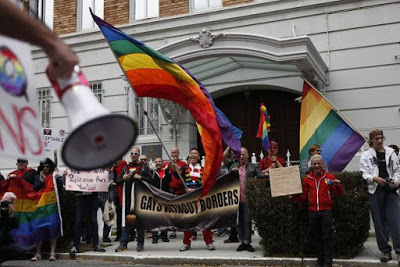 Hundreds of protesters marched to the Russian consulate in Toronto on Saturday.

A number of local politicians attended the rally Saturday, including Ontario’s Minister of Transportation Glen Murray, who is openly gay himself, and Parkdale-High Park MPP Cheri DiNovo. Speaking with CP24, Murray also said the law is worrisome. “If we were in Russia right now, we’d be mobbed by police,” he told CP24 at the protest. “It’s not just if you say gay or lesbian; if you hand out a rainbow flag, you can be arrested in Russia.” He said the province could take action on the issue through trade issues and through international organizations in order to pressure Russia to change the law. “We should be fighting with the IOC to make sure there’s a pride house, a safe place for gay and lesbian, transgender athletes there (in Sochi),” Murray said. Raphael expressed concern that even if safety is assured for visiting gay athletes, the law could still set a dangerous precedent. “Because Russia is a former super power, the world will watch to see what they get away with,” he said.

Also on Saturday in San Francisco, there was a smaller protest:

“In terms of you start with the laws that start marginalizing and criminalizing entire groups of people and it’s just outrageous. And there needs to be more focus on this, and Russia needs to be forced to back off,” said San Francisco Supervisor Scott Wiener. Gay and lesbian Russians have been brutally beaten, harassed and attacked following the passage of the laws. The country is now reversing its decision over how those laws will be enforced during the upcoming Sochi Winter Olympics. “I won’t stop being Johnny Weir, the gay fabulous ice skater person walking down the street,” said United States figure skater Johnny Weir.

More from the San Francisco Chronicle:

Chanting “we are watching” and “shame” while pointing at the closed Russian Consulate in San Francisco, protesters called Saturday for a boycott of Russian products over the country’s new antigay law. The law, signed by President Vladimir Putin and put into place last month, bans “propaganda of nontraditional sexual relations around minors” as well as public discussion of gay rights and relationships anywhere children might hear it. “This is the very beginning of a worldwide campaign to draw attention to what’s happening in Russia. What’s happening in Russia is a descent into fascism,” said longtime gay rights activist Cleve Jones, one of the speakers in a crowd of about 75 that included city supervisors and Assemblyman Tom Ammiano, D-San Francisco.