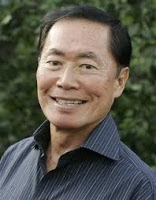 “Last week, Russia’s Sports Minister confirmed that the country intends
to enforce its laws against visiting LGBT athletes, trainers and fans,
meaning anyone even so much as waving a rainbow flag (and I presume many
men enthusiastically watching and dramatically commenting on figure
skating) would be arrested, held for weeks and then deported.Given this
position, the IOC must do the right thing, protect its athletes and the
fans, and move the 2014 Winter Olympics out of Russia. [snip]

“Many believe that such a call to move the Olympics out of Russia goes
too far. Would this be their opinion if the law instead called for the
arrest of any Jews, Roman Catholics or Muslims should they display any
sign of their religion, such as a wearing a yamaka or praying while
facing Mecca? Discrimination in any form is a blight upon the Winter
Games, and it must not be tolerated.” – George Takei, writing on the blog of the coming musical, Allegiance.