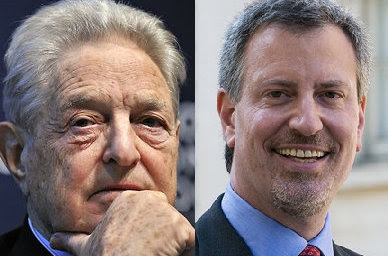 In a prepared statement, Soros said de Blasio, a 52-year-old Democrat, would work to reduce economic inequality and guard against too much influence over elections by corporations and wealthy individuals. He is competing against six other Democrats in a Sept. 10 primary election to win the party’s mayoral nomination. Soros, who has given the campaign $2,000, was unavailable for interviews, said Michael Vachon, a spokesman. “New York’s next mayor needs to possess conviction, intelligence, and a clear vision for where they want to take the city,” Soros said in a news release distributed by de Blasio’s campaign. “Bill de Blasio possesses these qualities.”

If you’ve ever traipsed through the blogs of Teabagistan, you know that after President Obama, George Soros is considered the most dangerous person in America. Because Marxist, socialist, communist, Martian, etc etc etc.  De Blasio is presently polling second behind City Council Speaker Christine Quinn, a position he vaulted into thanks to Carlos Danger.

George Soros’ network of foundations contributes tens of millions of dollars annually to groups that wage “political warfare” against Israel, according to a new report by NGO Monitor. Several of the OFS-sponsored groups, funded by Soros, support boycott, divestment, and sanctions campaigns against Israel, equate Israel’s settlements in the West Bank and the Gaza Strip with South Africa’s former apartheid regime, and in some cases deny Israel’s right to exist.

Previous Cuccinelli Vs McDonnell
Next Obama On Russia: I Have No Patience For Countries That Treat LGBT People Badly