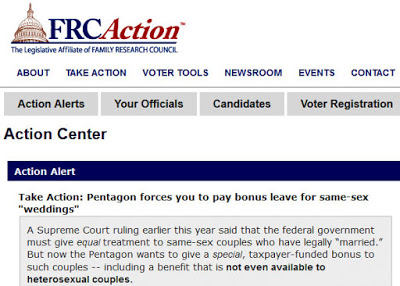 The Family Research Council has launched a campaign demanding that the Pentagon reverse its plan to allow gay soldiers to take up to ten days leave to get married in another state.  FRC vice president Peter Sprigg this week characterized the policy as an unfair “homosexual honeymoons” plan that discriminates against straight couples. From the FRC Action Center:

This special leave — only for destination weddings of homosexual couples—is above and beyond the regular annual leave granted to every service member. How much does this cost the American taxpayer? For ten days’ work, a captain (with six years’ experience) earns $1,787.20 in base pay alone – that’s not even accounting for benefits like housing allowance, health care, etc. And this special taxpayer-funded leave is only available for same-sex “weddings” — heterosexuals need not apply! This special treatment is not required by the repeal of the 1993 law on homosexuality in the military referred to as “Don’t Ask, Don’t Tell;” it is not required by the Supreme Court’s Windsor decision; and it is fundamentally unequal and unfair. In a time of sequestration and severe cuts to the military, the Pentagon should be in the business of strengthening our troops, not on same-sex “wedding” planning.

Previous HAWAII: Next For Marriage?
Next Another Breitbart Gun Giveaway