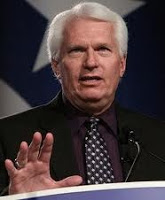 Fischer Has The Treasury Dept. Sadz

“There will be enormous federal pressure now on states to conform to the IRS. The Supreme Court decision placed an [improvised explosive device] under every state marriage amendment in the land. I predict we will very quickly see legal action in the 37 states that do not give legal recognition to same-sex marriage to force them to conform to federal policy on their tax forms, and you will get activist federal judges that will comply.” – Hate group spokesman Bryan Fischer, telling the Washington Post that he agrees with gay activists that yesterday’s Treasury Department decision to grant federal tax status to married gay couples in every state will escalate the fight for full equality nationwide.