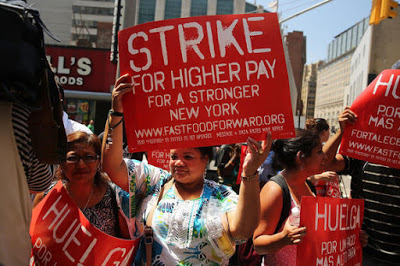 Some fast food workers across the nation are striking today in demand of a living wage. It’s unknown how many workers will participate.

Employees of McDonald’s Corp, Wendy’s Restaurants LLC, Burger King Worldwide Inc and others have pledged to walk off their jobs in 50 cities from Boston, Mass, to Alameda, Calif., organizers say. They are expected to be joined by retail employees at stores owned by Macy’s Inc, Sears Holdings Corp and Dollar Tree Inc in some cities. The workers want to form unions and bargain higher wages with their employers without facing retaliation from franchisees or their parent companies. They are demanding $15 an hour, up from $7.25, which is the current federal minimum wage. The median wage for front-line fast-food workers is $8.94 per hour, according to an analysis of government data by the National Employment Law Project, an advocacy group for lower-wage workers. Virtually all private-sector fast-food jobs are non-union, and organizers say retaliation against workers who try to organize is common.

Today’s action is being organized in part by Fast Food Forward in New York City.