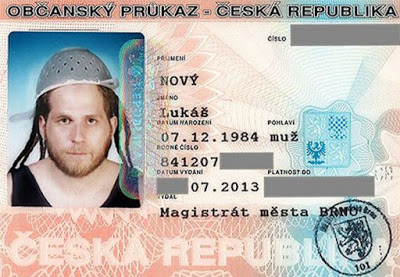 A man in the Czech Republic has won his religious battle to wear a pasta strainer on his head for his official government ID photo.

Prankster Lukas Novy, from Brno in the Czech Republic, claims that his Pastafarian faith means he has to wear the sieve at all times. Officials ruled that turning down Novy’s request would be a breach of the country’s religious equality laws. Brno City Hall spokesman Pavel Zara explained: ‘The application complies with the laws of the Czech Republic where headgear for religious or medical reasons is permitted if it does not hide the face.’ Novy claims to be a member of the Church of the Flying Spaghetti Monster, when emerged in the USA as spoof on organised religion. According to its tongue-in-cheek website their ‘only dogma … is the rejection of dogma’. Members claim to believe that an invisible alien made of spaghetti and meatballs created the universe after ‘drinking heavily.’

All praise His noodly appendage!