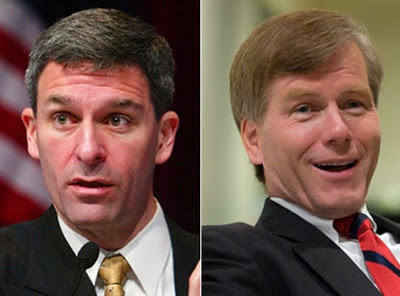 Today’s installment of GOP infighting comes out of Virginia, where anti-gay Attorney General (and gubernatorial candidate) Ken Cuccinelli has demanded a special legislative session on political ethics, something that scandal-plagued and anti-gay Gov. Bob McDonnell (shockingly) does not want.

With McDonnell (R) embroiled in a gifts scandal, the Republican candidate to succeed him said Virginia cannot wait until the legislature reconvenes in January to tighten the state’s lax disclosure requirements. “Trust is something that is easy to lose and hard to recover,” Cuccinelli said in an interview with The Washington Post. “I think the longer we let this go, the more difficult it is for Virginians to achieve the level of faith in their government that I think they’re accustomed to. And I think that’s something we can achieve if we move quickly.” Cuccinelli’s chief deputy told the governor in a face-to-face meeting Monday that the attorney general would publicly urge him to call the special session. After the meeting, a spokesman for the governor said he sees no need for it. Cuccinelli’s move puts more space between the attorney general, who has been touched by the scandal, and the governor, who has been consumed by it.

Cuccinelli, who last month launched a website in support of his campaign to reinstate anti-sodomy laws, presently trails former DNC chairman Terry McAuliffe by several points in polls for the governor’s race.

RELATED: Speaking of ethics, there have been many calls for Cuccinelli to resign as other state
attorneys general have historically done once they announced their
candidacy for governor. He has refused even though he holds a
large stock interest in a company currently suing the state over a tax
dispute.  Cucinelli has a long and vile history of blocking LGBT rights
in Virginia, including supporting a ban on gay adoptions. In 2011 he
declared that God had personally placed him in office to fight President
Obama.