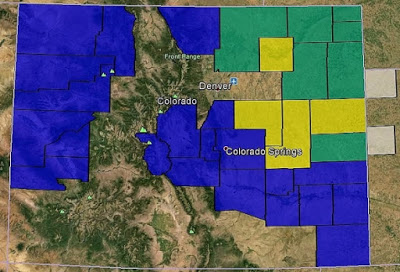 Colorado Counties To Vote On Secession

Seven rural Colorado counties have reportedly approved a November ballot measure that will ask residents if they want to break away and form the state of North Colorado. I took the above map from the website of the 51st State Initiative and it looks like the counties in yellow are also targeted. From the wingnut Washington Times:

Forming a state isn’t easy: Even if the ballot measures pass, the Colorado state legislature would be required to amend the constitution to configure the state’s borders and refer a request for a new state to Congress. Approving a 51st state would require a majority vote of both houses of Congress, although the Constitution doesn’t require the signature of the president, Mr. Hare said. “Again, folks say this can never happen. However, we are starting to hear from disenfranchised groups all over the country,” said a post on the 51st State Initiative’s website. “We are truly a divided nation. It is possible, if not likely, that we may not be the only group requesting from Congress the formation of a new state.”

RELATED: Similar secession movements have long been underway in several other states, perhaps most notably in California and Washington. There’s even a movement to make Long Island its own state, taking Brooklyn and Queens with them.