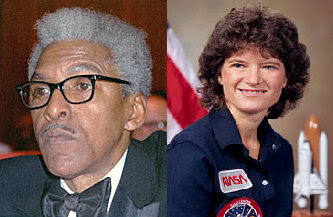 Civil rights pioneer (and gay man) Bayard Rustin, who organized the 1963 March On Washington, and astronaut Sally Ride, who (at her request) was outed after her death of cancer last year, will be among the recipients of this year’s Presidential Medal Of Freedom awards, the highest honor given to any civilian. Via press release from the White House:

Bayard Rustin’s contributions to the American civil rights movement remain paramount to its successes to this day,” said HRC President Chad Griffin. “His role in the fight for civil rights of African-Americans is all the more admirable because he made it as a gay man, experiencing prejudice not just because of his race, but because of his sexual orientation as well.” Rustin was active in the struggle for civil rights for sixty years, from organizing early freedom rides in the 1940s, to serving as key advisor to Dr. King, to helping found the A. Philip Randolph Institute.

But his advocacy was far from limited to the rights of African Americans. He worked to end apartheid in South Africa, fought for the freedom of Soviet Jews, worked to protect the property of Japanese Americans interned during World War II, and helped highlight the plight of Vietnamese “boat people.” And in the 1980s, he also spoke up for the rights of lesbian, gay, bisexual and transgender people, testifying in support of anti-discrimination legislation in New York. “Bayard Rustin dedicated his life to advocating for fairness and equality and overcame prejudice to help move our nation forward,” added Griffin.

The 50th anniversary of the March On Washington is August 28th.