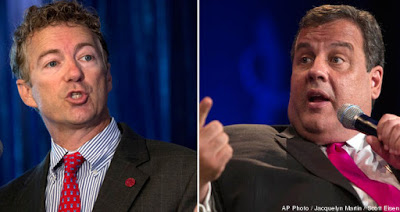 Christie Vs Paul, Round Five

New Jersey Gov. Chris Christie has rejected a peace offering by Sen. Rand Paul after their tit-for-tat feud stretched into a full week of returned insults.

“We’re going to have to patch things up if we can sit down,” Paul said in an interview on Fox News. “I am inviting him for a beer, anytime he would like to come down and sit down at the pub right around the corner from the Senate we’ll have a beer.” “I’m running for re-election in New Jersey. I don’t really have time for that at the moment,” Christie said to Eric Scott on 101.5 FM’s “Ask The Governor” program on Wednesday, according to the Asbury Park Press. “You know, if I find myself down in Washington, I’ll certainly look him up. I don’t suspect I’ll be there anytime soon. I’ve got work to do here.”