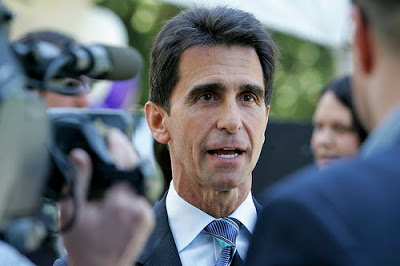 The Senate resolution, which Leno said will be passed in the coming weeks, could be the precursor to actual legislation barring investments in Russia. The resolution notes that homophobic laws have already led to violence against LGBT people in Russia and says the new law allows “police officers to arrest tourists and foreign nationals.” It calls on the Obama, Congress and the U.S. Department of State to “increase efforts to encourage the decriminalization of homosexuality in every country” and urges the IOC to “seek written agreement from the Russian government that the anti-gay propaganda law will not affect those attending or taking part in the games.” “We hope this resolution will bring greater attention to what (Russian President Vladimir) Putin is doing in Russia and encourage other states to follow our lead.This is classic scapegoating, a despotic ruler trying to solidify his power,” Leno said. “We’ve seen this throughout history, and it can potentially lead to genocide.”

Noting a recent deal in which a California state retirement fund invested in a Moscow shopping mall, Leno said that “billions of dollars” are potentially at stake. (Tipped by JMG reader Anthony)