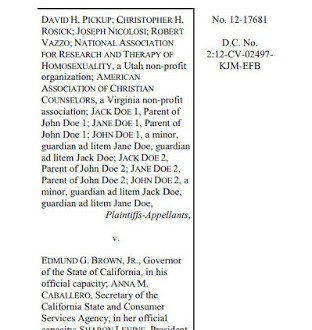 The Ninth Circuit Court of Appeals has rejected the attempt to block California’s law that bans “ex-gay” torture for minors.

In resolving two separate legal challenges to the new law, the 9th U.S. Circuit Court of Appeals rejected the arguments of a group of therapists and families who sued to block its enforcement. The three-judge panel was unanimous in upholding the statute, the first of its kind in the nation.

“(It) does not violate the free speech rights of practitioners or minor patients, is neither vague nor overbroad and does not violate parents’ fundamental rights,” Judge Susan Graber wrote for the court.

The therapists and families sued over the ban, arguing that it violates the free speech rights of therapists to discuss gay conversion with young patients, and families argued that the law tramples on religious freedoms to seek therapy to convert their children from homosexuality. The law barred licensed mental health professionals from using the therapy on those under the age of 18.

Another big loss for the Liberty Counsel! Stand by for the sadz AND threats about SCOTUS.

NCLR Legal Director Shannon Minter, who argued the case on behalf of Equality California in the Ninth Circuit, said: “This decision clears the way for this life-saving law to protect California youth from cruel and damaging practices that have been rejected by all leading medical and mental health professional organizations. The court of appeals ruled in very clear terms that state-licensed therapists do not have a constitutional right to engage in discredited practices that offer no health benefits and put LGBT youth at risk of severe harm, including depression and suicide. We thank Attorney General Kamala Harris, Deputy Attorney General Alexandra Robert Gordon, and the entire legal team at the California Department of Justice for their brilliant and tireless advocacy in defense of these vital new protections for LGBT youth.” “The court’s decision today on Senate Bill 1172 is a major victory for anyone who cares about the well-being of our youth. It will directly impact the lives of thousands of young people by protecting them from this horrific practice,” said John O’Connor, Equality California executive director. “We thank Sen. Ted Lieu for authoring this bill and Speaker John A. Perez for his bold leadership in getting the law passed.”