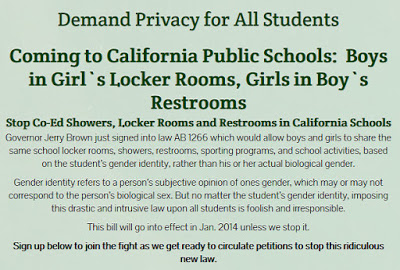 The anti-gay Capitol Resource Institute has launched a referendum drive to place a repeal of California’s just-approved transgender student rights bill to a public vote.

“We respect that some students are struggling with their own sexual identity, but we ask for respect for the other students who will be humiliated when a boy walks into the girl’s locker room,” said Karen England, Executive Director of Capitol Resource Institute. “This is a privacy issue, a safety issue, and a common sense issue.”  California law allows the public to vote out objectionable measures passed by the Legislature and signed by the Governor, but the proponents of a referendum are required to gather more than 500,000 signatures within 90 days from the signature of the Governor. “It seems unbelievable that this bill would ever have made its way through the Legislature and signed into law by the Governor. Many people have contacted our office asking if this is a mistake or a joke,” said England. “Others have said that they will be taking their students out of public schools, some even saying they are planning to move out of State.”

This is a predictable move by fringe groups that oppose all pro-equality measures and that historically have lacked the capacity to successfully execute similar efforts. AB1266 is an historic civil rights bill ensuring all students have the opportunity to participate and succeed in schools, including transgender students. EQCA and our partners will remain vigilant about monitoring the situation

Previous Email Of The Day – Eugene Delgaudio
Next Gary Bauer: Judicial Terrorists On Supreme Court Are Outlawing The Bible