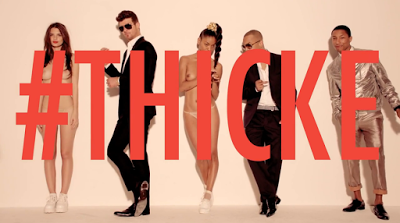 Last week Robin Thicke filed a preemptive lawsuit against the estate of Marvin Gaye, just in case they decided to sue over the alleged similarities between Gaye’s 1977 smash Got To Give It Up and Thicke’s Blurred Lines, which remains at #1 today for the 11th consecutive week. Today Billboard reports that Gaye’s family had rejected a six-figure offer from Thicke’s camp.

According to sources knowledgeable with the lawsuit, the settlement offer came after Frankie Christian Gaye, Marvin Gaye III and Nona Marvisa Gaye accused Thicke’s “Blurred Lines” hit single of plagiarizing “Got To Give it Up,” written and composed by Marvin Gaye, who died in 1984. Subsequently, Thicke, along with “Blurred Lines” co-writers Pharrell Williams and Clifford Harris, Jr., filed a lawsuit on Aug. 15 in U.S. District Court in Los Angeles requesting a ruling that “Blurred Lines” does not infringe on “Got To Give It Up.” Thicke’s lawsuit said the “intent in producing ‘Blurred Lines’ was to evoke an era. In reality, the Gaye defendants are claiming ownership of an entire genre. The reality is that the songs themselves are starkly different.”

RELATED: Thicke’s hit is the biggest selling single of the year and is now tied as the 5th longest-running #1 single of all time. (There are numerous ties above him as well.) With the exception of Elvis Presley’s Hound Dog/Don’t Be Cruel (1956), all of the singles in Thicke’s company have come after 1991, which is when Billboard began using SoundScan to track sales.