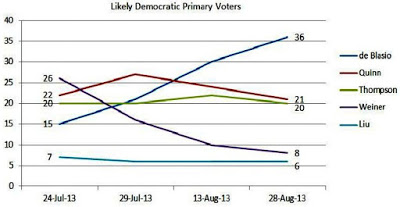 Well, maybe there won’t be a runoff after all.

If there was any question that Bill de Blasio is the mayoral race’s new front-runner, there isn’t any more. A new poll conducted by Quinnipiac University has the city’s public advocate with 36 percent of the likely Democratic vote, placing him within reaching distance of avoiding a widely-expected runoff election.

“Talk about breaking out of the pack!” pollster Maurice Carroll said in a statement acknowledging Mr. de Blasio’s quick rise. “Public Advocate Bill de Blasio, in fourth place just five weeks ago, is edging up on the magic 40 percent needed to avoid a Democratic primary runoff. And if there is a runoff, he clobbers Council Speaker Christine Quinn or former Comptroller and 2009 Democratic challenger William Thompson.”

Previous RUSSIA: Cops Raid Gallery And Seize Painting Of Putin In Women’s Nightie
Next An American Pamplona In Virginia