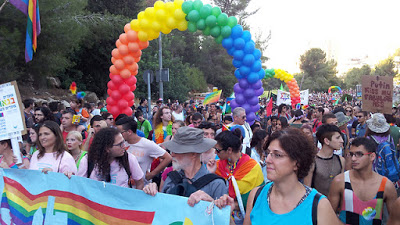 Yesterday’s gay pride event in Jerusalem drew 5000 participants and was relatively unmarred by protesters, unlike in recent years. The anti-gay donkeys made another appearance, but this time they were humans.

As usual, the march drew counter-protests. The “pride” march is particularly controversial in Jerusalem, Judaism’s holiest city, with many Jews and Muslims arguing that it encourages immoral acts and constitute a desecration of the holy city. One counter-protester was arrested for throwing a stink bomb at marchers. A short time later, two women were arrested for a particularly attention-grabbing protest. The two had dressed up as animals, one as a monkey, and one as a donkey with a sign reading, “I’m a proud donkey.”

Their protest was similar to one that took place one year earlier. During the 2012 march, counter-protesters brought three donkeys wearing sheets with the words “I’m a proud donkey” written on them. Homosexual politicians in Israel have expropriated the Hebrew word “ge’eh,” meaning “proud,” to denote “homosexual,” making use of the word’s similarity to the English “gay.” Thus “I’m a proud donkey” has a double meaning.