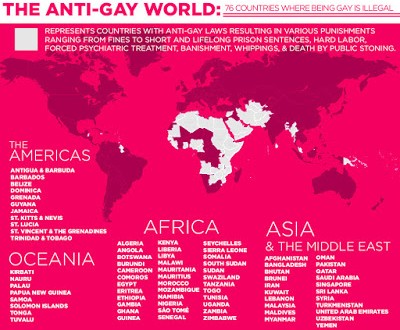 As Bad Or Much Worse Than In Russia

It is illegal to be gay in 76 countries. Punishments range from fines to short and lifelong prison sentences, hard labor, forced psychiatric treatment, banishment, whippings, and death by public stoning. The upcoming 2014 Winter Olympics in Sochi have put Russia’s “gay propaganda” law and the international community on an unavoidable collision course, but whatever happens in February is only the beginning of a broader (and much more complicated) conversation about the status of LGBT rights around the world.