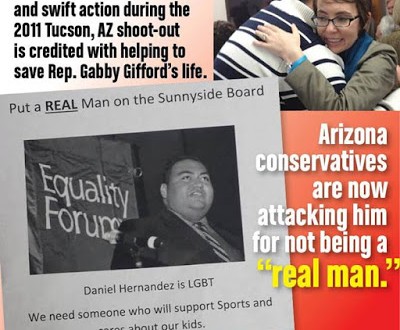 Daniel Hernandez Jr., the former intern credited with helping to save Rep. Gabrielle Giffords’ life when she was shot in 2011 and now an elected member of a Tucson-area school board, is facing a nasty recall election in which anonymous opponents are attacking him for being openly gay and for his advocacy on behalf of gun violence prevention. The story behind the recall is the kind of byzantine saga found only in local politics. Four of the five members of the Sunnyside Unified School District, which includes parts of Tucson and surrounding areas, are now facing recall petitions – two members who faced recall for their support of an embattled schools superintendent turned around and filed recall petitions on two members who opposed the superintendent, including Hernandez.

Previous Celebrities For Bill De Blasio
Next Inside Gay Pakistan