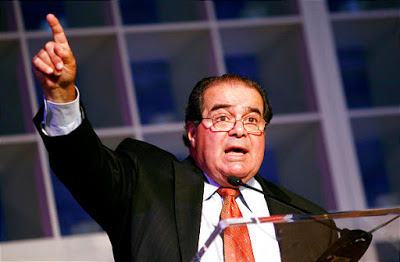 Antonin Scalia: The Courts Should Not Invent New Minorities With Special Rights

“It’s not up to the courts to invent new minorities that get special protections,” Scalia said to the audience at a Federalist Society event in Bozeman, Mt., presumably talking about the Court’s recent rulings on marriage equality. When the Court ruled against the Defense of Marriage Act, which had prohibited married couples from receiving federal marriage benefits, Scalia wrote a scathing dissent, in which made a similar argument. Scalia also noted during Monday’s address to the Federalist Society that while changes were made to the Constitution to give greater civil rights to minorities and voting rights to women, that the court shouldn’t operate that way today, according to the AP’s account.

Previous TAIWAN: 53% Back Marriage
Next New From Air New Zealand