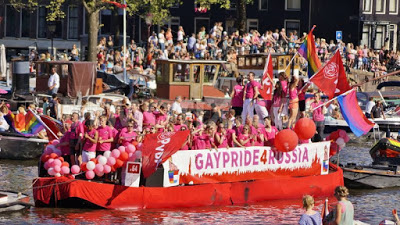 Amsterdam Pride Stands Up For Russia

LGBT people in the Netherlands stood up for their brothers and sisters in Russia at his weekend’s Amsterdam Pride boat parade, where anti-Putin slogans and displays were in heavy evidence. Members of the local Labour Party wore “Gay Pride For Russia” t-shirts.

On Saturday, more than 500,000 people attended the 2013 Gay Pride Festival in Amsterdam to celebrate homosexual rights. The Amnesty International boat caught the attention of many as it featured a portrait of Russian President Vladimir Putin, following the recent anti-homosexual propaganda laws in Russia. In July, four Dutch were arrested in Murmansk, Russia for suspicion of gay propaganda. The detained group of Dutch documentarists, lead by Sharelly Emanuelson, were able to return to the Netherlands safely.