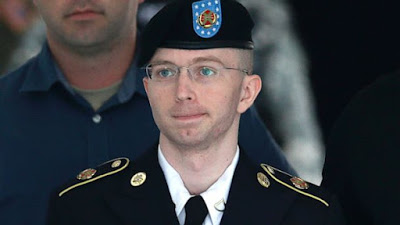 A military judge on Wednesday morning sentenced Army Pfc. Bradley Manning to 35 years in prison for leaking hundreds of thousands of classified documents to the anti-secrecy group WikiLeaks. Manning, 25, was convicted last month of multiple charges, including violations of the Espionage Act for copying and disseminating the documents while serving as an intelligence analyst at a forward operating base in Iraq. He faced up to 90 years in prison. Manning is required to serve one-third of the sentence, minus three and half years of time served, before he is eligible for parole. That will be in eight years when he is 33.

The ACLU has denounced the sentence.

“When a soldier who shared information with the press and public is punished far more harshly than others who tortured prisoners and killed civilians, something is seriously wrong with our justice system,” said Ben Wizner, director of the ACLU’s Speech, Privacy and Technology Project.