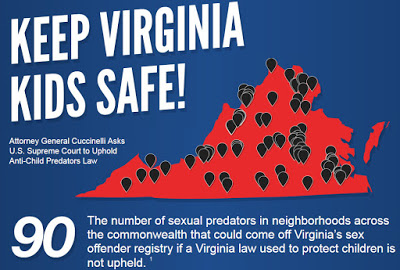 If you vote Ken Cuccinelli for Virginia governor, he’ll keep your children safe from sexual predators by making all oral and anal sex—between everyone, even married couples—a felony that carries a sentence of a year in prison. The state’s attorney general and Republican nominee for governor recently announced a campaign pledge to reinstate a Crimes Against Nature law, which has already been deemed unconstitutional by federal courts. This week, the campaign launched a website that presents the law banning sodomy as the only “anti-child-predators law,” which it’s not, and says that it “is only applied to sodomy committed against minors, against non-consenting adults, or in public,” when that’s actually not the case.

It’s not like Cuccinelli doesn’t realize that this law criminalizes the behavior of consenting adults as well as sexual predators; he’s the reason the provision including consensual oral and anal sex between grown people wasn’t removed to make the law constitutional in the first place. Cuccinelli’s explanation for opposing a version of the Crimes Against Nature law that focused on public sex, prostitution, and other nonconsensual acts? “My view is that homosexual acts, not homosexuality, but homosexual acts are wrong. They’re intrinsically wrong,” he said in 2009. “And I think in a natural-law-based country, it’s appropriate to have policies that reflect that … They don’t comport with natural law.”

Virginia Attorney General Ken Cuccinelli on Saturday said his belief that same-sex acts are “against nature and are harmful to society” have not changed. “My personal beliefs about the personal challenge of homosexuality haven’t changed,” the Republican gubernatorial candidate said in response to a question from the PBS NewsHour’s Judy Woodruff during a debate she moderated between him and former Democratic National Committee Chair Terry McAuliffe that took place at the Homestead in Hot Springs, Va. “What I want to do as governor is create an environment — including an economic environment — where every Virginian has opportunity.”