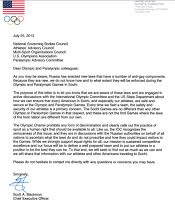 In a letter sent to sporting organizations, the US Olympic Committee has vowed that it is working to ensure the safety of all attendees and participants at the Sochi Olympics. Chris Geidner reports at Buzzfeed:

“The Olympic Charter prohibits any form of discrimination and clearly calls out the practice of sport as a human right that should be available to all. Like us, the IOC recognizes the seriousness of this issue,” U.S Olympic Committee CEO Scott Blackmun wrote on July 25. The letter, obtained by BuzzFeed, was sent in the midst of ongoing questions about the enforcement of Russia’s anti-LGBT propaganda law in advance of the 2014 Winter Olympics in Sochi, Russia.

Embiggen the image to read the full letter.