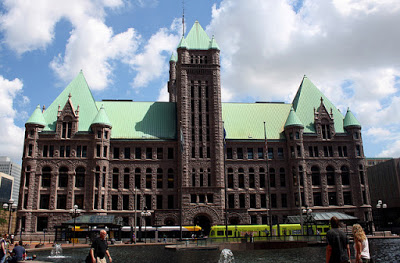 The city of Minneapolis is hosting an extravaganza at City Hall tonight where Mayor R.T. Rybak will officiate at the marriage of 42 same-sex couples. The celebration, which will stretch well into Thursday morning, includes performances by local musicians, a brass quintet and a reception at the nearby Hotel Minneapolis. Rybak staffer Andy Holmaas, who helped organize the Minneapolis event, said everyone from photographers to General Mills, which provided the cakes, have pitched in for free to help make the event successful. “People have been bending over backwards at the slightest ask — an unbelievable outpouring,” Holmaas said. “It’s not surprising, but it’s still really inspiring to see Minneapolis and the whole region just jump on board to do everything they can.”