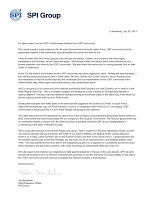 The CEO of Stolichnaya Vodka has written an open letter to the LGBT community in order to stave off the nascent boycott campaign. The letter opens:

The recent dreadful actions taken by the Russian Government limiting the rights of the LGBT community and the passionate reaction of the community have prompted me to write this letter to you. I want to stress that Stoli firmly opposes such attitude and actions. Indeed, as a company that encourages transparency and fairness, we are upset and angry. Stolichnaya Vodka has always been, and continues to be a fervent supporter and friend to the LGBT community. We also thank the community for having adopted Stoli as their vodka of preference.

In the US, the brand’s commitment to the LGBT community has been ongoing for years. Among the best examples, I can cite the series produced by Stoli in 2006 called “Be Real: Stories from Queer America” which featured short documentaries on real life stories depicting the challenges and accomplishments of the LGBT community in the United States Stoli is very proud of its current exclusive national partnership with Gaycities.com and Queerty.com in search of the Most Original Stoli Guy. This is a fantastic program that started as a local initiative in Colorado and became a national platform. Previous national initiatives included serving as the official vodka of the Miami Gay Pride Week as well as ongoing events with focus on Pride month.

Click on the image in this post and read the message in full. Then give us your reaction.

Previous SCOTLAND: Marriage Bill Published
Next Pay With Your Face