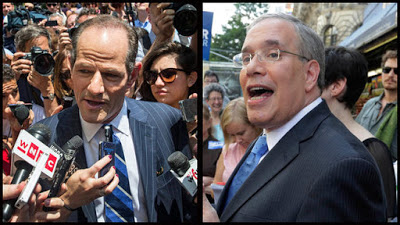 In the new poll, taken Monday and Tuesday, 67 percent of Democrats said he deserved a second chance, and 44 percent said he was a changed man. Nearly two-thirds said his scandal mattered little to the race, or not at all. He also enjoys a healthy favorability rating, with 46 percent of Democrats saying they had a positive opinion of him, compared to 40 percent saying the same of  Stringer. The poll of 536 registered Democrats has a margin of error of plus or minus 4 percentage points. Voters were asked which scandal — Spitzer’s or Weiner’s — was worse, and the responses were nearly evenly split. Thirty-one percent said Weiner sending lewd pictures over Twitter was more egregious, and 29 percent chose Spitzer’s involvement in prostitution. Nineteen percent said the two scandals were equally reprehensible, while 13 percent said neither was offensive.  Stringer, who until this week seemed to have a lock on his party’s nomination, has his own work to do. Forty-three percent of Democrats polled said that they’d never heard of him or were unsure what they thought of him.

Stringer already has the endorsements of virtually all of the city’s major labor unions as well as most of the members of the Democratic delegations to Congress and the state legislature.