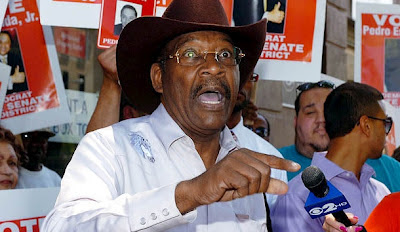 Quote Of The Day – Ruben Diaz

“You should know that Erick Salgado is the President of the Council of Youth Christian Churches. Not satisfied with the moral, civic, cultural and political status of New York City according to Mr. Salgado, “after careful consultation with his family, with Mr. Gregory Davidzon and others”, Erick Salgado decided to become a candidate in the Democratic Primary for the Office of Mayor that will take place on Tuesday, September 10, 2013.

“Salgado’s problem, now, is how to raise millions of dollars to allow him to pay for radio, tv and newspaper advertising in order to compete with the other candidates’ millions – and to let New York City voters learn more about his platform and agenda for the city. Salgado could declare that he is a homosexual, go to the City Hall Clerk, get a license, marry another man in a public garden, and become the very first male New York City mayoral candidate who is officially married to a man. If he does this, I am absolutely certain that he will get millions and millions of dollars in free publicity.

“Ladies and gentlemen, the problem with Erick Salgado is that he is an Evangelical Minister, a teacher and a preacher of the Gospel of Christ and a believer.” – New York state Sen. Ruben Diaz, on the mayoral candidacy of NOM-endorsed Erick Salgado, who helped Diaz and NOM organize their anti-gay hate rally in the Bronx in 2011.  (Tipped by JMG reader Colin)