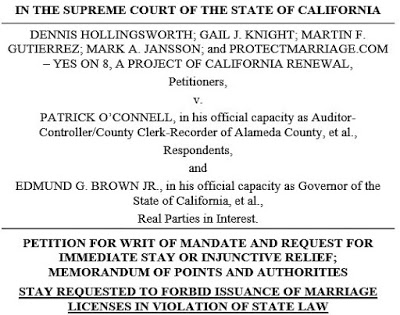 Via press release from Protect Marriage:

Moments ago, we filed a new petition in the California Supreme Court against all of California’s 58 county clerks, and state officials, seeking to restore the enforcement of Proposition 8, the state’s constitutional amendment limiting marriage to a man and a woman.  The undeniable fact is, the man-woman definition of marriage, as passed by a majority the voters, is still a valid part of our state constitution.

Yet county clerks statewide are lawlessly defying that law by issuing gender-neutral marriage licenses. We are asking California’s Supreme Court to restore the rule of law and the public’s confidence in the integrity of the initiative process.

The action we filed today contends that at least 56 of the 58 county clerks must continue to follow Proposition 8 because they were not parties to the recent federal lawsuit against Prop 8, and that the state’s governor and attorney general have no legal authority to order local county clerks to disregard the state constitution.

Our petition also reminds the justices that our opponents, the attorneys for the plaintiffs who challenged Prop 8, have repeatedly admitted that the 56 county clerks not involved in their case “are not directly bound by the injunction” issued by a single San Francisco judge against Prop 8. In fact, “super-lawyer” David Boies told the courts that “the scope of the injunction is quite limited”, and at least the 56 county clerks would remain free to “refuse a marriage license to a same-sex couple…without violating the injunction.”