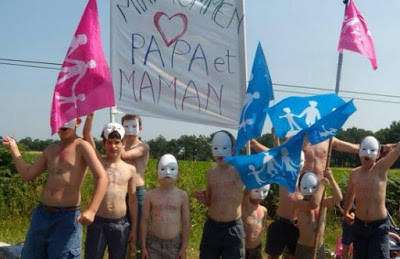 Photo Of The Day: Mini-Hommen

France’s far-right Printemps Français (French Spring), which organized some of the most violent anti-gay protests during marriage battle, has posted the above photo titled “Bravo Aux Mini-Hommen!!!” The Hommen, you should recall, are the anti-gay and yet oddly homoerotic group of young French men who protest topless against same-sex marriage. You’ve got to be carefully taught…. (Tipped by JMG reader Str8Grandmother)