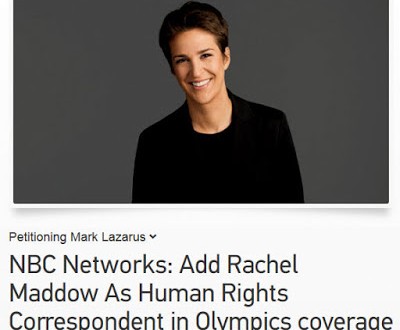 The petition has been launched by Truth Wins Out:

NBC’s Olympic coverage has long featured myriad human interest pieces, about the athletes competing, and about all aspects of life in the home nation. There is more than enough time in prime time Olympic coverage for hard-hitting pieces exposing the reality of what LGBT people, political dissidents and other minorities face every day under the Putin regime.

Rachel Maddow is one of the most respected television journalists in the United States, with a reputation for being thorough, fair, informative and entertaining. Rachel has the expertise and the instincts to tell this full story to a viewing audience who are appalled by the treatment of their Russian brothers and sisters. Adding her to NBC’s coverage won’t fly in the face of the Olympic spirit, but rather enhance it, as there is nothing in the ethics or the history of the Olympic Games that can coexist peacefully with the war Russia is waging against her own citizens, and the rest of the world needs to know.

NBC is fortunate to have such an esteemed, beloved journalist in their family of networks. Bringing her into the Olympics coverage is, frankly, a no-brainer. Do the right thing, NBC, for the Olympics, and for the Russian people. The world is watching.