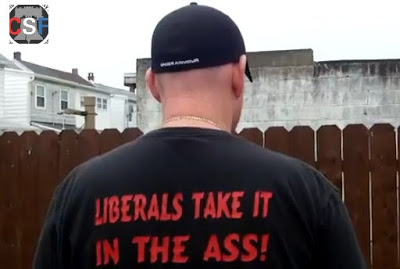 PENNSYLVANIA: Gilberton Police Chief Says “Fuck All You Libtards Out There”

The mayor of Gilberton, Pennsylvania is standing by her city’s police chief despite a series of profanity-laced and threatening videos. In a video that has received wide attention, police chief Mark Kessler repeatedly tells those upset by his use of profanity to “go f*ck yourself” as he fires various automatic weapons.

Mayor Mary Lou Hannon told The Morning Call that Kessler had the right to express himself. The city would “not take action to quash free speech, whether or not each member of council or any member of council agrees with it.” Kessler has uploaded several profanity-laced videos to YouTube. In one video, Kessler berates “libtards” and warns of an armed rebellion against the government.

“F*ck all you libtards out there, as a matter of fact, read my shirt,” he says, turning around to show a message on his back which read, “Liberals take it in the a**.” “You take it in the ass and I don’t give a f*ck what you say so you can all just go f*ck yourselves. Period. I wont be going to D.C. and I don’t give a f*ck. If you f*cking maniacs want to turn this into an armed revolt, knock yourselves out. I’m not about that, so see you on the other side.”

Gilberton has a population of 687. They need a police chief?