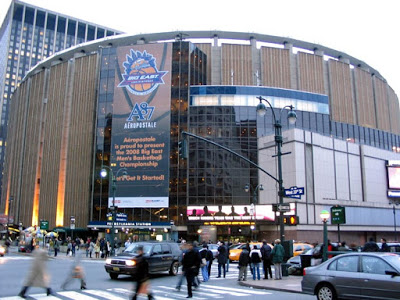 Yesterday the New York City Council voted 47-1 to renew the lease for Madison Square Garden for a mere ten years, rather than an “in perpetuity” lease as the venue had wanted.

Ten years should be enough time, officials said, for the Garden to find a new location and for the city to devise plans for an expanded Pennsylvania Station, which currently sits below the Garden, and the redevelopment of the surrounding neighborhood. “This is the first step in finding a new home for Madison Square Garden and building a new Penn Station that is as great as New York and suitable for the 21st century,” said Christine C. Quinn, the City Council speaker. “This is an opportunity to reimagine and redevelop Penn Station as a world-class transportation destination.”

Ms. Quinn renewed her call for the creation of a commission to devise the plans. Civic leaders and some developers have long sought to rebuild Penn Station, a cramped and crowded maze for the more than 500,000 people a day who traverse it. But doing so would be an enormously complicated, multibillion-dollar undertaking that has foiled officials in the past. And anything can happen in the next 10 years, including several elections for mayor and governor.

The numbers were a remarkable showing for the rust-colored arena on Atlantic Avenue, which opened in late September last year with a string of concerts by Jay Z. Overall, Barclays ranked No. 2 worldwide in ticket sales with $46.9 million, second to the O2 Arena in London, with $119 million, Billboard reported. Madison Square Garden was fourth with $39 million. Pollstar, a trade magazine for the live music industry, said Barclays was third worldwide in number of tickets sold, with 657,000, well ahead of Madison Square Garden, which sold 194,000.

Whatever happened to the grand plan to turn the Main Post Office into a new Penn Station? A website in support of that project hasn’t been updated in over a year.