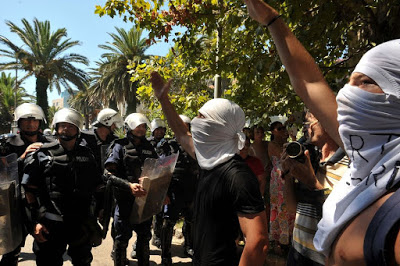 Several hundred extremists shouting “Kill the gays” attacked gay activists and clashed with police on Wednesday in a bid to disrupt the first ever pride event in staunchly conservative Montenegro, which is seeking to improve its human rights record as it bids to join the European Union.

Angry assailants threw rocks, bottles, glasses and various other objects — including chairs from local cafes — at several dozen flag-waving gay activists who shouted back “Kiss the gays.” A shower of stones and bottles also landed on special police securing the gathering in the coastal town of Budva.

Police then intervened to push the attackers away and allow the event to continue. The participants briefly marched by the sea before they stopped to hold speeches as extremists shouted insults from a distance. Later, police again clashed with smaller groups of extremists scattered throughout the town.

I’ll have more photos and video when they became available.

Previous New York Times: Weiner Should Withdraw
Next PENNSYLVANIA: Gilberton Police Chief Says “Fuck All You Libtards Out There”