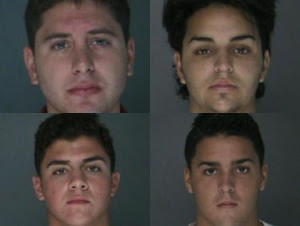 The four suspects were walking down Deer Park Avenue in Babylon around 3:30 a.m. Sunday, when they asked two men for directions to the train station, according to Suffolk County police. They went on to punch, kick and shove the two men while using anti-gay slurs, police said. A witness saw the attack and called 911. Police later arrested Gregory Gilbert, 20; Shane Buckley, 18; Nicholas Battaglia, 18; and Justin Buckley, 17, all of Oceanside. All the suspects were charged with two counts of third-degree assault as a hate crime, while Gilbert, Battaglia and Shane Buckley were also charged with second-degree gang assault.

One of the victims was treated and released, the other remains hospitalized with unspecified serious injuries. Their names and ages have not yet been disclosed.

The Long Island GLBT Network has issued a press release:

“The alleged anti-gay hate crime in Babylon is disturbing and frightening. Many people think that just because we are winning the right to marry in many states, that the world has changed and everything is now okay for gay people. This incident reminds us that we need to be vigilant in combatting hate and homophobia and that there still is a tremendous amount of work to do to make our Long Island a safe and welcoming community for all gay, lesbian, bisexual and transgender people and families. It is our hope that the Suffolk County District Attorney will continue to prosecute this as the hate crime that it is, and show no mercy to the attackers – they need to be sent away to prison, and by doing so, this will send a message all across Long Island that hate and violence will not be tolerated against any group.”