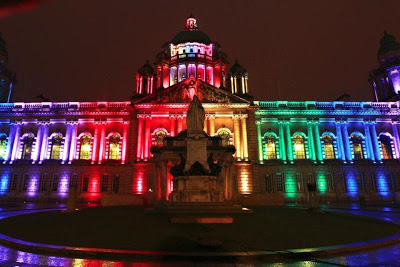 The City Hall in Belfast, Northern Ireland, was lit up in rainbow colours last night to coincide with the start of Pride, but it will be the only of the UK’s capital cities where same-sex couples will be banned from marrying once the law changes in Westminster and Edinburgh. Last night,the House of Commons Speaker, John Bercow, told the audience of Amnesty’s annual Belfast Pride lecture that although Northern Ireland is “considerably behind” when it comes to LGBT rights, “if it’s won through in the rest of the Kingdom it will prevail in Northern Ireland”.