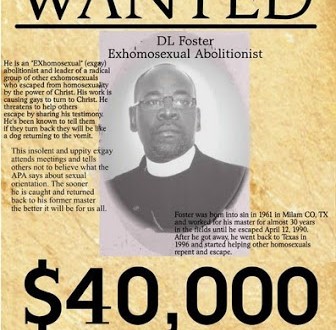 Since first reporting on the creation of “Ex-Gay Pride Month” and its now-cancelled reception at the Family Research Council, we have uncovered more unhinged rants by organizers DL Foster and Greg Quinlan. Foster, who previously called for Dan Savage’s arrest and claimed gay Christians are like people wearing “blackface,” has posted several blog entries likening gay rights advocates to slave owners and the Ku Klux Klan. Now, he has taken it one step further by equating himself to Harriet Tubman, literally putting a picture of himself over a Harriet Tubman “wanted” poster. Foster goes on to compare himself to Jesus Christ. But since Foster is freeing people from gay slavery…naturally we here at Right Wing Watch, according to Foster, are like the slave catchers trying to bring the tens of ex-gays back to the gay plantation.

You really should read the full thing.