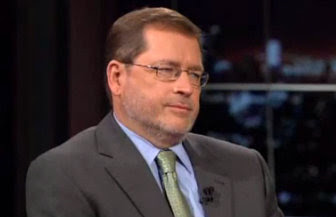 Grover Norquist (above) wasn’t too happy with a joke Dan Savage made on last night’s Bill Maher show. Mediaite has a recap:

Savage credited all of the people brave enough to come out to their families as one of the biggest contributing factors to the social progress that’s been made in the United States. One significant achievement was that, while years ago, “if one of those douchebags who’s always threatening to kill me made good on it,” as Savage put it, his family would not get the same kind of benefits straight couples would when one of the partners dies.

He also said how whenever he has people come up to him and tell him that gay people cannot biologically produce a child, he just tells them “Anything is possible for God,” and “I’m gonna keep inseminating my husband and keep my fingers crossed.” The camera jumped to a one shot of conservative guest Grover Norquist looking visibly uncomfortable, leading Maher to quip that Savage should move on so as not to induce any actual vomiting.