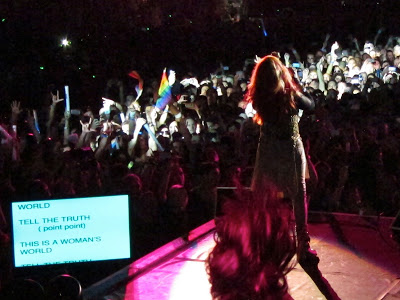 The photos above are from where Dr. Jeff and I were in the backstage area last night, where we could see Cher’s giant teleprompters, which not only scrolled the words to her hits, but included stage directions. Tell the truth (point, point), This is a woman’s world (four fist pumps), This is a woman’s world. I’m not convinced that the vocals were entirely live, but ten thousand gay men did not care in the least and their singing was almost as loud as the sound system. Three songs: Strong Enough, Believe, Woman’s World. The first clip is by my pal Matt Rettenmund of Boy Culture. Cher was introduced by surprise guest Whoopi Goldberg.

UPDATE: I’ve replaced a couple of the earlier clips with Matt’s superior video from the press pit.