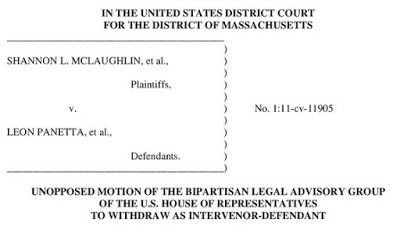 Chris Geidner has the story at Buzzfeed:

House Republican leaders announced in a court filing Thursday that they will not be defending remaining statutes similar to the Defense of Marriage Act that ban recognition of same-sex couples’ marriages.  Judge Richard Stearns had asked the parties in a lawsuit addressing the rights of service members and veterans and their spouses to give “any reasons why judgment should not enter for plaintiffs in this case,” following the Supreme Court’s June 26 decision striking down section 3 of DOMA. The deadline for responding to Stearns’ question is Thursday.

Here’s what the BLAG attorneys told the court:

The Supreme Court recently resolved the issue of DOMA Section 3’s constitutionality. See United States v. Windsor, 570 U.S. __ (2013), 2013 WL 3196928 (U.S. June 26, 2013). The Windsor decision necessarily resolves the issue of DOMA Section 3’s constitutionality in this case. While the question of whether 38 U.S.C. § 101(3), (31) is constitutional remains open, the House has determined, in light of the Supreme Court’s opinion in Windsor, that it no longer will defend that statute. Accordingly, the House now seeks leave to withdraw as a party defendant.