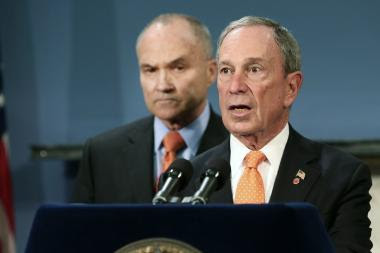 Mayor Bloomberg today vetoed a bill that would create an office to oversee the NYPD and that would make it easier for citizens to sue the police for abuses. Gothamist reports:

The Community Safety Act, which is comprised of two separate laws meant to crack down on the NYPD’s racial profiling, was passed by the City Council with enough votes to override Bloomberg’s veto of the measure. Many view Bloomberg’s veto as a stalling tactic until he can pressure enough City Council members to change their votes. Should the override succeed, Bloomberg has hinted at a court challenge, arguing that the bill conflicts with state law. (He’s also been looking at other ways to get back at council members who support it.) “There is no need for additional oversight of the NYPD,” Bloomberg wrote of his veto. The override vote could happen in August, just a few weeks before the mayoral primary.

The bill was supported by Christine Quinn, although she only backs the portion that would create the Inspector General office. When the bill passed last month, NYPD Commissioner Ray Kelly, whom Quinn has pledged to keep on if she is elected (but maybe fire later), said, “Take heart al Qaeda wannabe’s because the City Council has found a way to undermine our partners.”

“Today, Mayor Bloomberg continued to turn a blind eye to the racial profiling that takes place in our neighborhoods each and every day. I believe we need a real change, and encourage City Council members to stand by their votes and override the Mayor’s veto. Our young men cannot afford for us to waver in the face of intimidation from City Hall.”