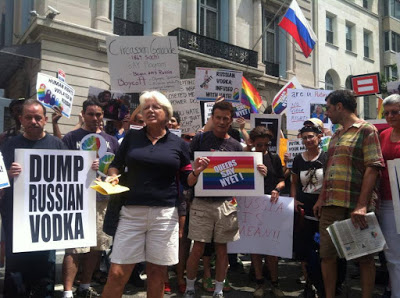 At this writing about 100 activists are demonstrating outside the Russian consulate on Manhattan’s Upper East Side. Scott Wooledge is posting photos to the Facebook page for Memeograph.  The bottles of vodka were donated by the Hell’s Kitchen location of the gay sports bar, Boxers.

UPDATE: ACT UP is also tweeting photos. The caption on the photo below reads: “@NYPD telling @RUSALGBT to take their banner down from Russian consulate.”