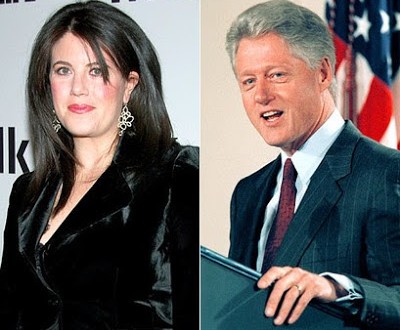 Oh-so-conveniently timed for the 2016 presidential aspirations of Hillary Clinton, the National Enquirer claims to have unearthed an audio “sex tape” recorded by Monica Lewinsky sixteen years ago.

A never-before-heard tape of Monica Lewinsky telling then-President Bill Clinton that she could ‘take all my clothes off’ if he agreed to an illicit meeting with her has reportedly surfaced. The tape, which records the White House intern desperately trying to lure him into meeting her, was reportedly released to the National Enquirer after it was obtained by a cleaner hired by friends of Lewinsky. It was long thought that the raunchy four-minute tape, which was recorded in November 1997, had been destroyed after the sexual affair was revealed in 1998, according to the Enquirer. The recording, made months after their final alleged tryst in March 1997, reportedly shows a determined Lewinsky, then 24, pleading with the married president to meet her – and telling him she plans to be persistent because ‘I really want to see you’.

Hit the link for more details on what Lewinsky supposedly says on the recording.