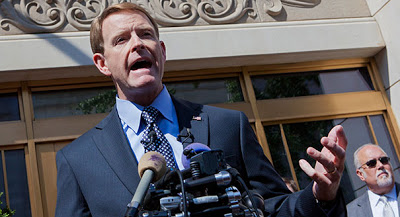 Tony Perkins Has The Supreme Sadz

“By striking down the federal definition of marriage in DOMA,
the Court is asserting that Congress does not have the power to define
the meaning of words in statutes Congress itself has enacted. This is
absurd. The Defense of Marriage Act imposes no uniform
definition of marriage upon the individual states. However, the states
should not be able to impose varying definitions of marriage upon the
federal government. The ruling that the federal government must
recognize same-sex ‘marriages’ in states that recognize them raises as
many questions as it answers. For example, what is the status of such
couples under federal law if they move to another state that does not
recognize their ‘marriage?’ This decision throws open the doors for
whole new rounds of litigation.

“We are disturbed that the court refused to acknowledge that the proponents of Proposition 8 have standing to defend Proposition 8. This distorts the balance of powers between the legislative, executive, and judicial branches of government. The Court’s decision allows the executive branch to effectively veto any duly enacted law, simply by refusing to defend it against a constitutional challenge. Ironically, by refusing to defend the law, California’s executive branch has also denied the nation any definitive ruling on the constitutionality of defining marriage as the union of one man and one woman. – Hate group leader Tony Perkins, riding a gigantic rainbow-spewing waambulance being towed by a glitter-covered unicorn.