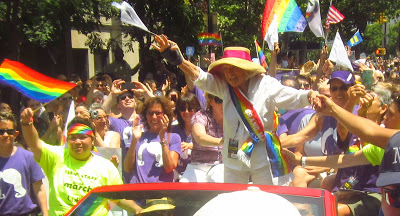 New York City Pride Grand Marshal Edith Windsor rode in triumph today as about a million people screamed her name. When Windsor’s car turned onto Christopher Street, the thunderous chants of “EDIE! EDIE! EDIE” echoed down the very blocks where our movement started 44 years ago this week.  I was completely verklempt as were many, many joyous people behind the barricades.