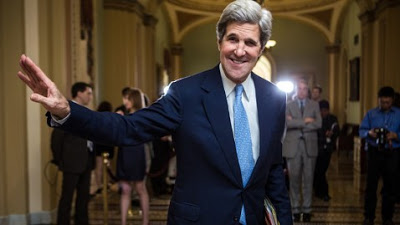 Via press release from the office of Secretary of State John Kerry:

The Department of State joins people around the world in celebrating Lesbian, Gay, Bisexual, and Transgender (LGBT) Pride Month. Forty-four years after Stonewall, we see incredible progress in the fight to advance the human rights and fundamental freedoms of LGBT people, both here in the United States and globally. Protecting universal human rights is at the very heart of our diplomacy, and we remain committed to advancing human rights for all, including LGBT individuals.

Unfortunately, recent events underscore that we can’t be content with the progress we’ve made. We still have a long way to go. All over the world, people continue to be killed, arrested, and harassed simply because of who they are, or who they love. There are LGBT people of all ages, all races and all faiths, citizens of every country on Earth. In too many places, LGBT people and their supporters are still attacked if they just attempt to stand up for their rights and participate in peaceful rallies or marches, or simply for being who they are.

The United States condemns this violence and harassment. LGBT persons must be free to exercise their human rights—including freedom of expression, freedom of religion and freedom of assembly and association—without fear of reprisal. Human rights and fundamental freedoms belong to all individuals, regardless of their sexual orientation or gender identity.

The United States will continue to stand up for the human rights of all people, during this month and every month throughout the year, and we are proud to do so.

The legacy of Secretary Clinton carries on.