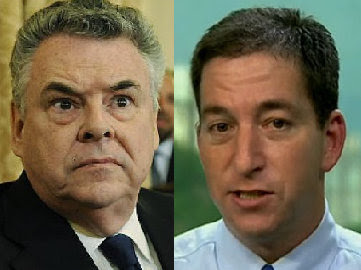 “Not only did [Greenwald] disclose this information, he said he has names of CIA agents and assets around the world and threatening to disclose that,” King said when asked by host Megyn Kelly why he wants to prosecute the reporter. “I think [prosecuting reporters] should be very targeted and very selective and a rare exception. In this case, when you have someone who discloses secrets like this and threatens to release more, yes, there has to be legal action taken against him.” He then asserted: “This is a very unusual case with life-and-death implications for Americans.”

Video via Think Progress. Greenwald fires back via Twitter below.

Previous Glenn Beck: My Whistleblower Will Bring Down The Government Tomorrow
Next Workers Dangle 45 Stories Over NYC