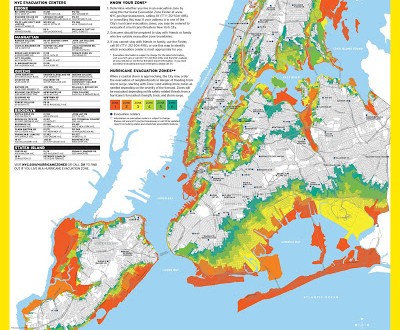 In the wake of Hurricane Sandy, New York City has greatly expanded the boundaries of the mandatory hurricane evacuation zones.  Gothamist reports:

The mayor’s office says that the new “zones are based on coastal flood risk resulting from storm surge – the ‘dome’ of ocean water propelled by the winds and low barometric pressure of a hurricane; the geography of the city’s low-lying neighborhoods; and the accessibility of these neighborhoods by bridge and roads.” And the new zones “include an additional 600,000 New Yorkers not included within the boundaries of the former zones. The increased number of zones will provide the City with more flexibility in targeting areas to evacuate in advance of a predicted storm.

Exactly where one million people are supposed to go is not explained.