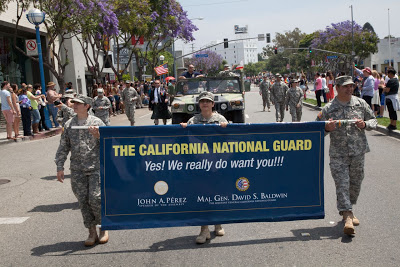 Via press release from John Perez, openly gay Speaker of the California Assembly:

The California National Guard also had its first-ever recruiting booth at the Pride Festival following the parade. Several of the Guardsmen marching alongside Speaker Pérez and Maj. Gen. Baldwin are gay and were marching openly for the first time as members of the Armed Forces.

“The overwhelmingly positive response to the California National Guard from Pride participants today was matched only by the respect and enthusiasm the Guard showed toward our community,” Speaker Pérez said. “Today makes it absolutely clear the Guard is committed to including and reflecting all the people they serve.”

“We are a performance-based force, and one’s sexual orientation shouldn’t affect their ability to serve and excel,” said Maj. Gen. Baldwin. “Duty to one’s state and nation – not sexual orientation – is the defining trait of our soldiers and airmen.”