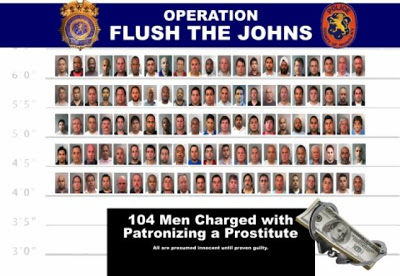 Using the Village Voice’s Backpage.com site, cops in Nassau County lured in 104 men with prostitution offers from undercover male and female officers. The arrested men range in age from 17 to 79.

More than 100 johns — lawyers and doctors among them — were named and shamed in an aggressive Nassau County sting after soliciting sex from cops posing as prostitutes. The arrests were announced Monday after a month-long investigation dubbed “Operation Flush the Johns.” Not only did the 104 busts send shockwaves through marriages, law firms and medical offices, they also sent a strong message from law enforcement that people who pay for sex will be treated like common criminals in Nassau County. “This whole concept of looking at johns as victims — they’re not victims!” explained Nassau County District Attorney Kathleen Rice. “They’re further exploiting and victimizing trafficked women and men.”

One of the ads for a male prostitute claimed that “Dylan” is a “down to earth guy who has a secret wild side.”  A lawyer for one of the arrested men denounced the Nassau County prosecutor for creating the above poster with the faces and names of those charged: “To put out a poster to humiliate these men and their families is outrageous. It was nothing short of outrageous for the prosecutor to try to humiliate these men.”

And following that quote, the Daily News posted its own embedded scrollable list of the names, ages, and home towns of those arrested.  The majority of the commenters on the above-linked article are outraged.

RELATED: After losing major advertisers, last year Village Voice Media legally separated itself from Backpage.com, which has long been the target of state attorneys general and religious groups. According to Wikipedia, Backpage.com is now owned by two major Voice shareholders.